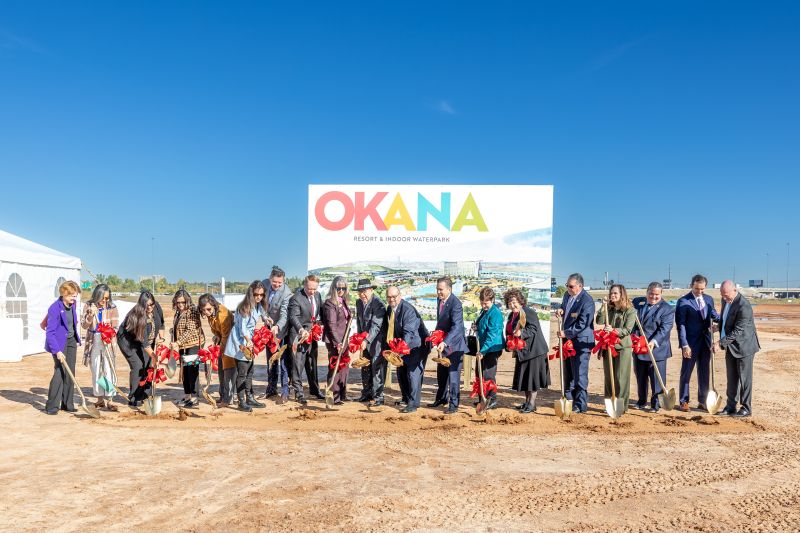 Situated along the Oklahoma River near downtown Oklahoma City and adjacent to the First Americans Museum, OKANA will be a $400 million tourist destination designed to continue the momentum of economic development in Oklahoma City.

“We expect the OKANA Resort & Indoor Waterpark to  be a significant economic driver of job growth and opportunities for everyone in this region,” Governor Anoatubby said. “Today we celebrate the continuation of strong partnerships among city and state officials and private entities that have been integral in bringing this significant tourism and hospitality venue to central Oklahoma.“

The first phase of the project will develop about 40 of the 140 acres at the site held by OKANA MDE, LLC, a wholly owned subsidiary of the Chickasaw Nation.

The resort-hotel will feature an 11-story, 404-room hotel at which guests will enjoy luxurious accommodations, riverfront and lagoon views and proximity to downtown Oklahoma City and the Boathouse District. Rooms will range in size from 420 to 720 square feet, larger than traditionally sized hotel rooms.

The resort also will feature a 12,000-square-foot family entertainment center, a two-level indoor waterpark covering over 100,000 square feet, 39,000 square feet of conference center space, a spa, a golf simulator. Adjacent to the the resort will be multiple retail outlets and dining options covering 36,000 square feet.

The development also will include a 25,000-square-foot First Americans Retail Gallery and amphitheater. The gallery will provide a space for First American artists to showcase and sell works of art and other creations. The amphitheater will accommodate 1,500 guests and have an adjacent outdoor lawn area that will be used for events or festivals. These venues are meant to augment the museum’s programming with local artist performances, festivals, lectures and similar events.

Chickasaw Nation Secretary of Commerce Dan Boren said the OKANA resort will employ about 400 people at first and make an annualized economic impact of about $97 million in its first year of operation. It’s estimated the 10-year economic impact of the development will exceed $1 billion. Eventually, full-time employment is projected to expand to as many as 800 direct and indirect jobs annually with a payroll of about $320 million over a 10-year period.

During the construction phase, about 1,400 jobs will be connected with the project with about $80.7 million in payroll, according to a study done by Hotel & Leisure Providers.

“It takes cooperation between governments at the tribal, state and local levels, as well as with business leaders, for a project of this magnitude to come to fruition. We appreciate the willingness of all involved to help make this development something that will be a landmark for Oklahoma and Oklahoma City.”

The development is planned to open in early 2025 pending any construction delays.

Boren said OKANA will connect easily with the Boathouse District with the new Oklahoma River Cruises Ferry Landing, which is funded partially through a $4 million grant from the Federal Transit Association. Additional access to the area will be available through the trails system from both the north and the south sides of the river. With the property located directly on the Oklahoma River, visitors will have a front-row seat to the starting line for U.S. Rowing National High Performance Center’s 2,000-meter course.

Wynne/Jackson, a Dallas-based real estate development firm, is assisting in the development design for the entire project. New York-based Aquatic Development Group is the hotel developer, while Wisconsin-based ADCI is the hotel and waterpark architect. Benchmark Hospitality will operate the hotel and waterpark, which is expected to employ about 400 people in its operations. CallisonRTKL also is assisting in the master planning of the entire project and serving as architect for the First Americans Retail Gallery and retail and dining components.